QUESTIONS about the PACT Act? Click HERE to learn more about enrollment options and answers to frequently asked questions.

24/7 Confidential, crisis support for Veterans and their loved ones. CLICK BELOW to learn more. 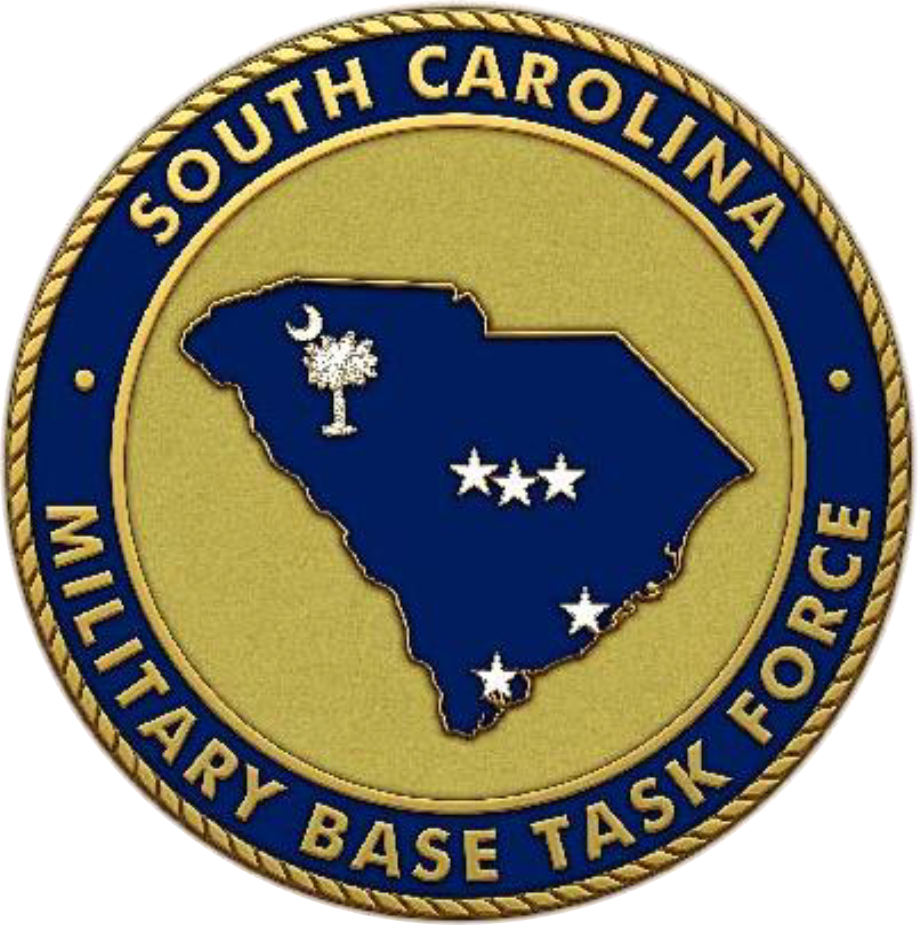 The South Carolina Military Base Task Force exists to enhance the value of our state’s military installations and facilities, as well as the quality of life for our military personnel and their families. The Task Force is also charged with coordinating efforts among public and private sectors to maintain a significant U.S. Department of Defense presence in South Carolina.

Established by Executive Order of the Governor, the SC Military Base Task Force (MBTF) includes top-level representation from local governments, chambers of commerce, retired military, the SC National Guard, and the SC Legislature. The MBTF is tasked “to advise the Governor and General Assembly on various military matters that affect the state.”

The Chairman, and Program Manager staff the MBTF, coordinating activities between the services, installation communities, and the state. In addition to regular meetings, the MBTF hosts an annual Base Commanders’ Briefing to the Governor.

Importance of South Carolina to the Military

South Carolina’s military community provides critical strategic value to our nation’s defense. All five services have a significant presence in our state, leading to synergy and mission support. Our location on the East Coast is advantageous for deployment to the Middle East, South and Central America, Africa, and Europe, as well as to Military Operating Areas (MOAs) offshore. Each base supports multiple defense missions that contribute to defense readiness, training and homeland security.

Joint Base Charleston is “the launch point for the nation’s resolve,” providing airlift, sealift, prepositioning, and strategic logistics missions throughout the world. Joint Base Charleston is home to more than 60 Department of Defense and federal agencies. The installation supports 90,000 airmen, sailors, Marines, soldiers, Coast Guardsmen, civilians, dependents, and retirees. From the Navy’s Nuclear Power training, SPAWAR’s information warfare technology, and the 628th Air Base Wing providing expeditionary airmen to combatant commanders, the defense assets in Charleston are integral components in our nation’s efforts to secure America and promote global freedom.

The footprint of Joint Base Charleston encompasses some of our nation’s most unique military assets. The 23,000 acres include 22 miles of waterfront with 4 deep-water piers, two Navy Nuclear Training Submarines, the only unencumbered explosive arcs in the continental US, and 1600 buildings (42 million square feet under roof) with 269 bunkers that hold up to 60 million pounds of conventional ordnance. Joint Base Charleston also has 2,400 acres at North Auxiliary Airfield, an offsite training facility located in Orangeburg County, South Carolina.

The Coast Guard serves as Captain of the Port of Charleston, providing security and safety for commercial traffic and the coast of South Carolina and Georgia. For the Ports, Coast Guard Sector Charleston screened 2,311 foreign cargo vessels for safety, examined 230 foreign vessels, monitored over 100 cruise ship arrivals and 400,000 passengers, and conducted 1,400 Law Enforcement boardings in 2016.

Fort Jackson is the largest and most active Initial Entry Training Center for the Army, annually training over 50,000 soldiers and providing 5,000 soldiers Advanced Individual Training. Fifty-four percent of the Army’s Basic Combat Training is completed at Fort Jackson as well as sixty-one percent of all women entering the Army. Fort Jackson is also home to the U.S. Army Soldier Support Institute, the Armed Forces Army Chaplaincy Center and School, the National Center for Credibility Assessment (formerly the Department of Defense Polygraph Institute), and the Drill Sergeant Academy. Weekly graduations attract approximately 5,000 visitors to Columbia.

The South Carolina Military Department consists of the SC Army National Guard, comprised of approximately 10,000 Soldiers, and the SC Air National Guard (SCANG), comprised of approximately 1,200 personnel. The Governor serves as the Commander-in-Chief. More than 58 armories across the state contain over 2 million square feet of space. The force structure is tied to the strategic defense of the nation, and includes the 263rd Army Air Missile Defense Command that defends the National Capital Region. McEntire Joint National Guard Base is home to the 169th Fighter Wing and the 59th Aviation Troop Command.

Shaw AFB is one of the Air Force’s most modern bases with the operational advantage of dual, parallel runways. Located in Sumter, the base’s strategic proximity to North Africa and Europe ensures rapid deployment. Shaw’s squadrons consistently are the first deployed in Middle East conflicts. The US Air Force’s largest F-16 combat wing, the 20th Fighter Wing, comprised of 79 jets, resides at Shaw AFB. It is also home to the Ninth Air Force and two defense headquarters: the US Air Forces Central Command (AFCENT) and US Army Central Command (ARCENT). Both AFCENT and ARCENT are components of the US Central Command (USCENTCOM) and together represent America’s air and land force logistical and warfighting headquarters for the Middle East and Southwest Asia regions.

Marine Corps Air Station Beaufort trains to deploy without deploying to train. The air station is the second highest tasked aviation unit in the Marine Corps, and projected to increase over time to 106,000 operations per year. MCAS hosts the only USMC F-18 squadrons and is the sole training installation for training F-35B pilots, including US and foreign squadrons. The F-35 is the nation’s most advanced aviation war fighting aircraft. MCAS Beaufort supports operations for the 2nd Marine Aircraft Wing, attached II Marine Expeditionary Force (II MEF) unit, and Marine Corps Recruit Depot Parris Island (MCRD PI).

The air station is home to Marine Aircraft Group 31, which is comprised of six F-18 squadrons that constantly deploy to support training and combat operations. MAG-31 houses an F-35B training squadron, VMFAT-501. MCAS Beaufort’s strategic location is critical for training and deployment. The irreplaceable assets of ranges, Military Operating Areas (MOAs) and airspace are exceptional, easily accessed and include 52,000 square miles over water. MCAS operates the Townsend Bombing Range (TBR) in nearby coastal Georgia, which is expanding by over 30,000 acres to become the nation’s premier training range.

The Marine Corps Recruit Depot Parris Island “Makes Marines.” The installation is home to two commands: the Training and Education Command and the Recruiting Command. The transformation from civilian to Marine is intangible but accomplished by the core values and discipline instilled during the 12-week basic training that culminates in the legendary Crucible. In 2016, 17,000 recruits entered training at MCRD Parris Island and 19,000 are projected for 2017. MCRD Parris Island trains 49% of the males and 100% of the females entering the Marine Corps. Foreign military also train at Parris Island.

The Naval Hospital Beaufort (NH) has 1,000 personnel. It is one of a few US Naval health facilities with a base (127 acres) and housing “on board”. The hospital’s mission is to keep the Navy and Marine Corps family ready, healthy and on the job. It manages Parris Island’s new Physical Therapy/Sports Rehabilitation Clinic, and a health clinic at MCAS Beaufort. The NH works closely with the VA hospital in Charleston to provide a number of specialty clinics at NH while it serves retirees, veterans, and active duty personnel and their families, totaling approximately 35,000 beneficiaries. The hospital participates in Force Protection’s annual “Citadel Shield” anti-terrorism exercises.